Adolfo Suárez Madrid-Barajas Airport is an airport owned by the public company Aena SME, S.A. It is located in the northeast of Madrid, Barajas district, 12 kilometres from the centre of Madrid, the capital of Spain.

Formerly known as Madrid-Barajas airport, its name was changed after 83 years of use to Adolfo Suárez Madrid-Barajas, in tribute to a former Spanish president who died in 2014.

Contact for people with hearing and/or speech impairment:
Aena has an information and customer service line for passengers with hearing and/or speech impairment. This services allows users with these impairments to contact the Information and Customer Service Line from their computer, tablet or smartphone, and access the chat via the following link; without the need for other people to act as their intermediaries. The service is available from 07.00 am to 12.00 am, 365 days a year.
Persons with impaired hearing .

Aena, S.A. is a Spanish public company that manages 46 airports and 2 heliports in Spain; the airport in the capital of Spain is one of them. Originally known as Aena Aeropuertos S.A, it adopted by law the name of Aena SME, S.A following the provisions of Royal Decree Law 8 of 4 July 2014.
ENAIRE is the air navigation manager in Spain. Part of the former Aena Aeropuertos S.A., ENAIRE now executes exclusively responsibilities related to airport and air navigation activities, in addition to performing the national and international operational coordination of the Spanish air traffic control network.

If you wish to make a complaint about a restaurant service (cafeterias, restaurants, etc.), bear in mind that they have their own Official Book of Catering, in which you can make your complaint, complaint or suggestion in the same place as the events.

If you lost an object in the Madrid airport facilities and want to ask if it has been found, write an email to mad.seg.objetosperdidos@aena.es or go to the lost property offices at terminals T4 and T1, both open from 7am to 10pm.

Lost property and items left on board

If you forgot something inside the aircraft you should contact your airline, or you can also contact with its baggage handling company.

The airport has the code IATA MAD and ICAO LEMD. 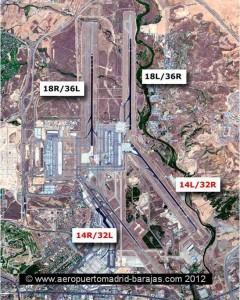 The airport It has four terminals for commercial passenger aviation (T1, T2, T3 and T4); plus an Executive Terminal for executive and business aviation, an air cargo center with more than 200 companies installed and two main hangar zones, one in the Old Industrial Area, between terminals 3 and 4, and another in the Industrial Area La Muñoza.

Madrid-Barajas counts on four parallel runways, two to two parallel: the 18L/36R - 18R/36L and the 14L/32R – 14R/32L. Its nomination was modified in 2012 adapting to the changes of the gradual movement of the magnetic North in relation to the geographic North.
it has also a fifth runway, the first one to be built which is used only as parking lot.

The new plan under development has broad objectives that will provide the airport facilities with long-term improvements and expansions, including an expansion, with which it will be able to serve 80 million passengers annually, ensure high levels of connectivity with connections to Latin America and other world hubs, new designs to ensure modern and powerful infrastructure.

The previous expansions of Madrid-Barajas airport focused on the commercial refurbishment of terminal T4 and its T4S satellite in 2013.

At the boarding areas of terminals T4 and T4S, passengers will enjoy distinguished shopping in high-quality brand name stores with attractive fashion garments and luxury accessories. This way, the airport will be upgraded economically, granting it a considerable status among the best European Airports.

In the boarding areas of terminals 4 and T4S, exclusive premises and spaces have been created to accommodate highly renowned firms, both in fashion and luxury accessories, thus giving the airport a commercial status that places it in the same line as other European airports.

AeropuertoMadrid-Barajas.com is a portal that offers visitors information on the Adolfo Suárez Madrid-Barajas Airport, but has no direct or indirect relationship with AENA and is not the airport official website.

For further information on flight schedules, connections, immigration and customs services, please contact clientesmad@aena.es. If you wish to advertise on billboards, inside or outside the airport, please consult the tariff guide at Aena.

The website AeropuertoMadrid-Barajas.com is managed by Aeropuertosenred, a private company that offers information about Spanish airports and the latest news in the sector since 1996. To contact Aeropuertobarcelona-elprat.com, please write to web@aeropuertosenred.com.

How to get to & from the airport by bus: urban, suburban and large distance bus transport.

Find the shortest route from your point of departure, and park your car upon arrival.

Information about taxi stands and tariffs at Madrid airport.